Breaking records, Vogue Italia unveils an unprecedented 100 collectible covers for its behemoth September issue. Hopeful of the future, the magazine cast models, actresses, human rights activists, social media influencers, artists, writers, and everyday people shot by Mark Borthwick as an ode to the value of print, at large. Produced in New York, casting directors Piergiorgio Del Moro and Samuel Ellis Scheinman along with creative director Ferdinando Verderi took on the daunting task when production measures started to relax this summer and were in a race to complete before printers closed back in Italy. www.quintral.com spoke with editor-in-chief, Emanuele Farneti to talk about the monumental issue and his hopeful thoughts on the future of Italian fashion at large. 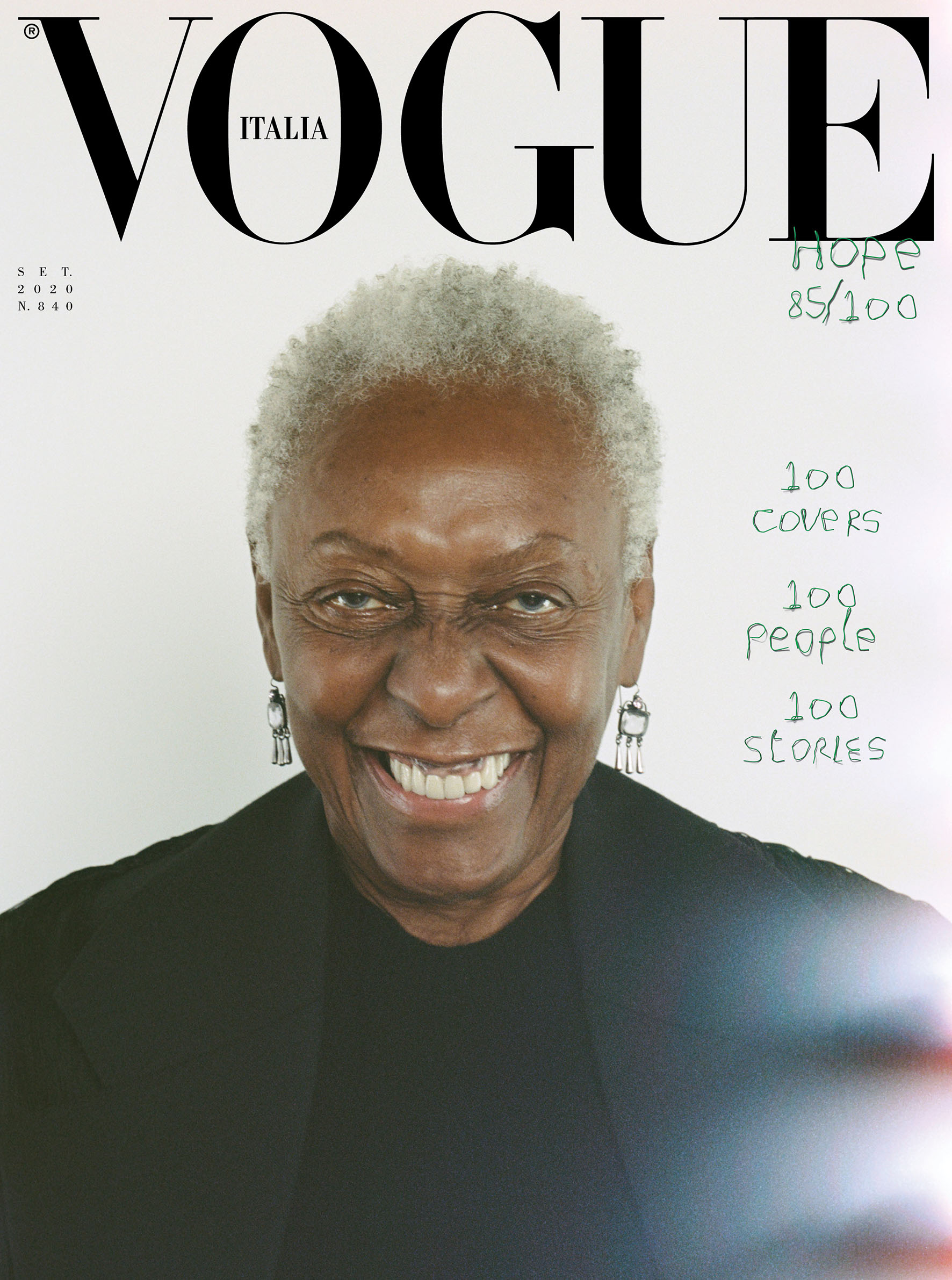 You unveiled 100 people on the cover of Vogue Italia for the first time. Was it challenging, this production?
It would be very tough on normal days, and you can imagine how tough it was right after lockdown with all the restrictions, but we are extremely happy. It’s a love letter to print. I think this idea of investing, even economically, in printing a lot of different covers is something that is not very common nowadays. I like this idea of collectible prints. There’s been a couple of issues this year, like the white cover at the beginning of quarantine and the illustrated covers in January that became collectibles. 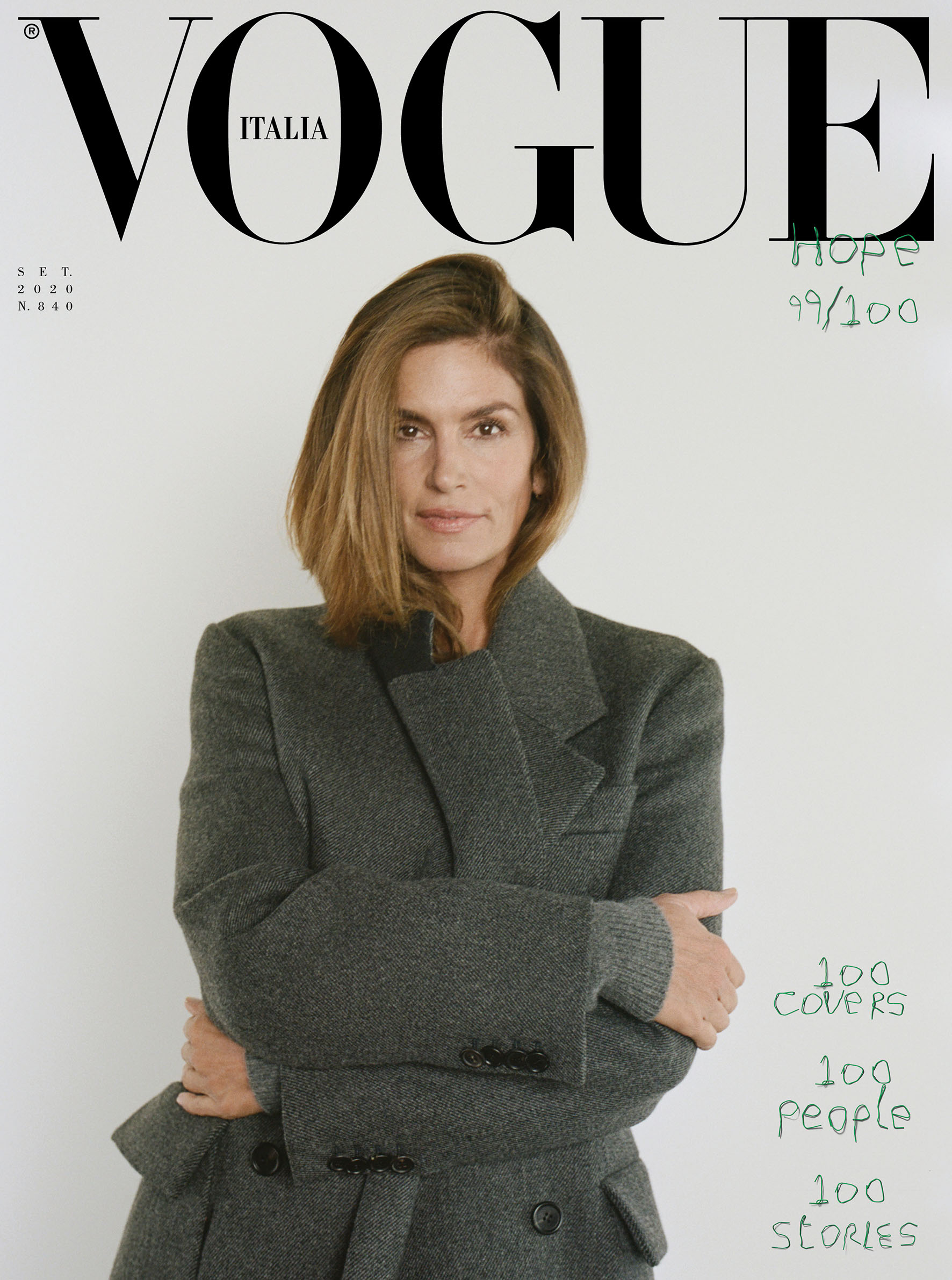 It’s great to push forward the concept that print is essential. What logistical obstacles did Vogue Italia come across in printing and distributing 100 covers?
It was of course a lot of work. Even more, considering that a side effect of August is that it is a weird month here since most of the country is stopped for vacation. We had a tense time for delivering it within the first week of August. I think the nicest aspect is that we give the same importance to each of the 100 covers. All of them are numbered, but we are not giving more importance to cover number 1 or to cover number 100. So even distribution wise, we wanted it to be completely random, in a good way, with the idea that different newsstands will try different covers and if you want to find more, you will have to look for them. 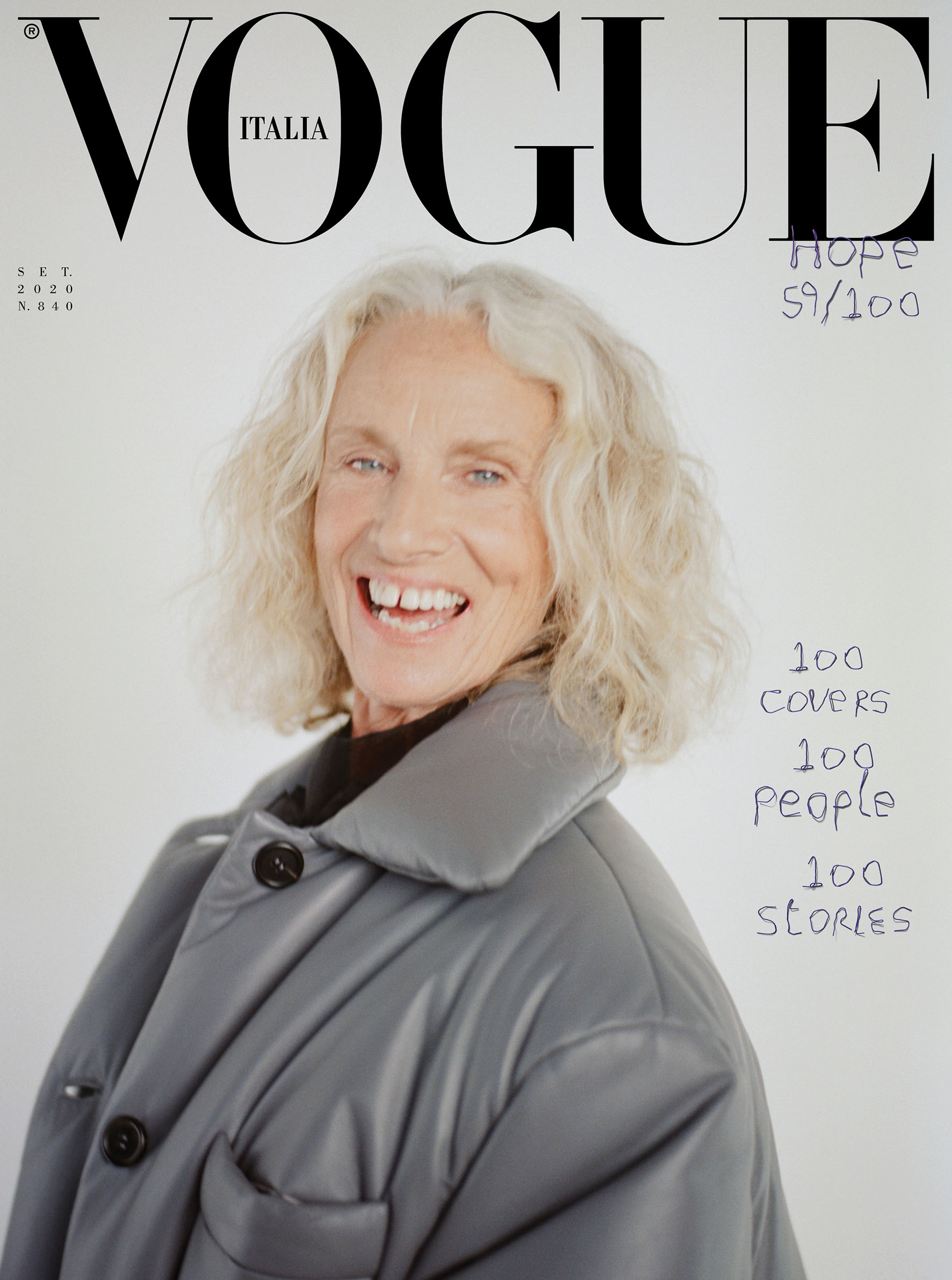 Mark Borthwick shot it, which is amazing considering it’s been a while since he last shot your publication. A return of sorts?
Yeah, it’s a comeback after a very long time. I have a couple of colleagues in the office that used to work for Vogue Italia back in the Franca [Sozzani] years and I guess it was probably 20 years ago. It’s a great comeback. The production was more like an artistic performance and happened in New York when Ferdinando [Verderi] was there. We were not allowed to travel. Every 20 minutes there was another muse coming since they wanted to keep social distancing. 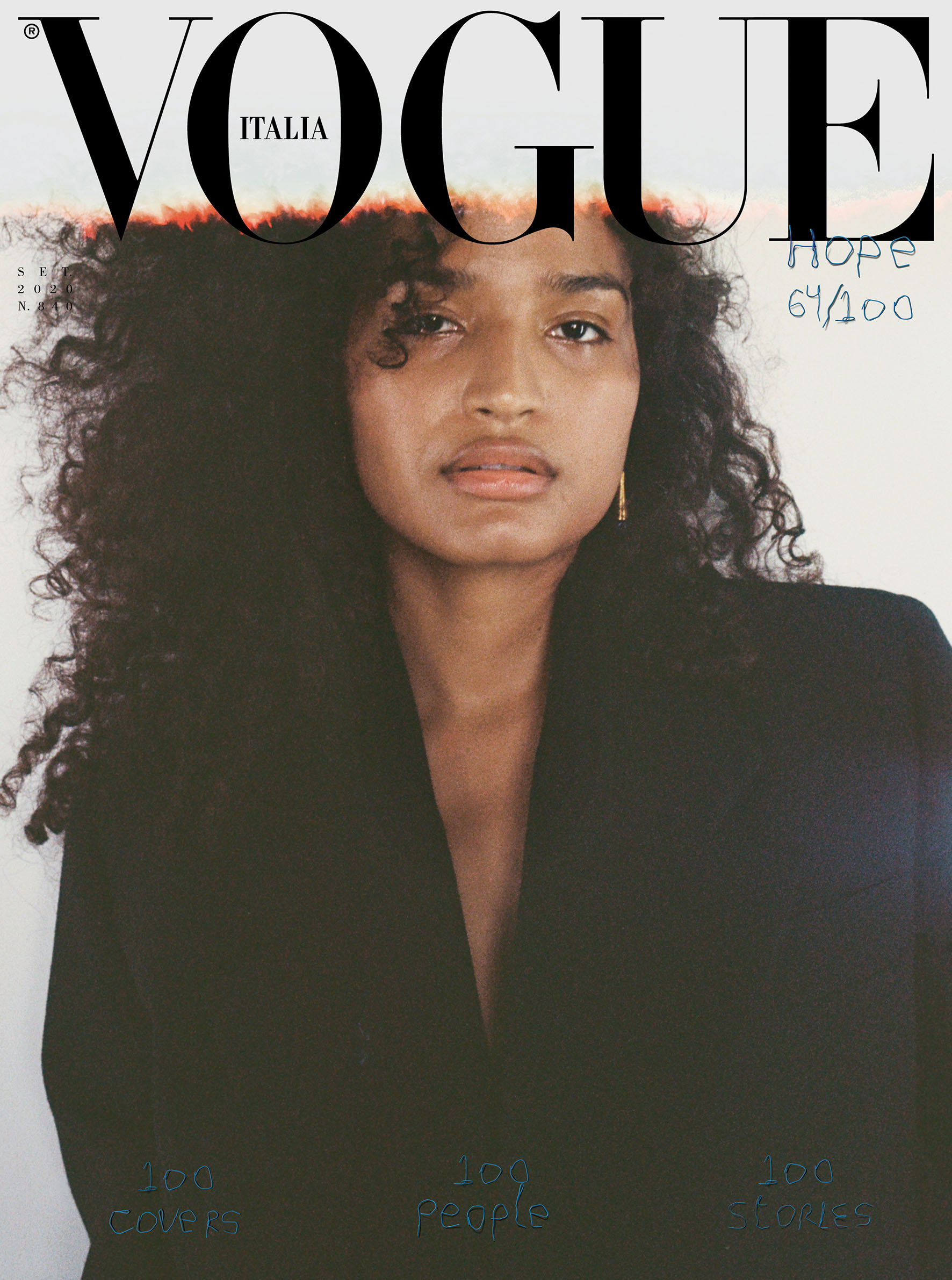 I know organizing that level of talent is not easy. It was surprising to see that casting directors Piergiorgio del Moro and Samuel Ellis Scheinman had people who we certainly recognize, but also featured a couple of people on the cover who are not in fashion. Why 100? Was there something significant about the number?
Photography is a lot about teamwork. We’re a group of people that work very well together and not just one face needs to represent a magazine. We like this idea of people coming together. Basically, we wanted something bold and we wanted something that’s never been done before. You know, I think we ended up thinking that 100 was a beautiful, meaningful number, even if there was no specific reason for that to be 100 or 50 or 70. 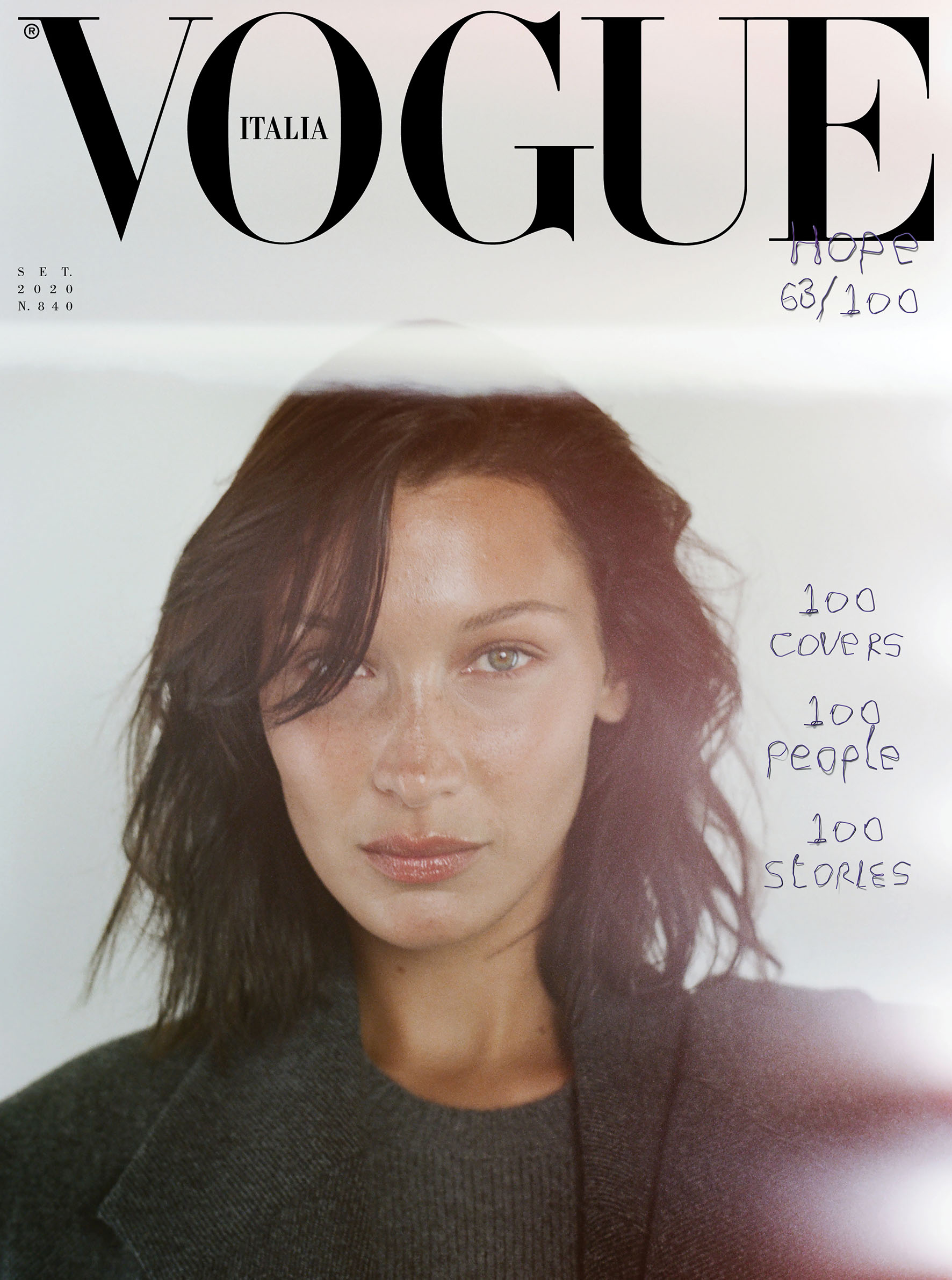 Knowing that the September issue for the entire Conde Nast roster was focused on “hope”, what is Vogue Italia as a publication hopeful for?
I liked this idea that we are bringing all our voices together. There was the first experiment in January with the Vogue Values issue, and we were all asked to use this concept of “hope” for September. We accomplished it all in different ways, staying true to the DNA of the magazine and the situation of each country. I remember when we were discussing that there were people saying, “How can we do something about hope living in countries like Mexico or Brazil, where it is, the pandemic is still very bad?”

Being in Italy, one of the countries that were hit harder and before others by the virus, we wanted to do something that was a rebirth and showing the joy of life. I define this whole thing like a tribute to humanity because I really loved the idea of having so many beautiful, different people with strong energies smiling, sharing their life experiences, sometimes very dramatic life experiences, as a celebration of life. I think it’s very needed, and as I said in my editor’s letter, I think that it’s moments like these human beings can either shut up or shout. We decided to shut up in April when we had the White cover because we thought that was the proper thing to do. Now we thought it was time to shout, meaning celebrating life, beauty, and diversity. 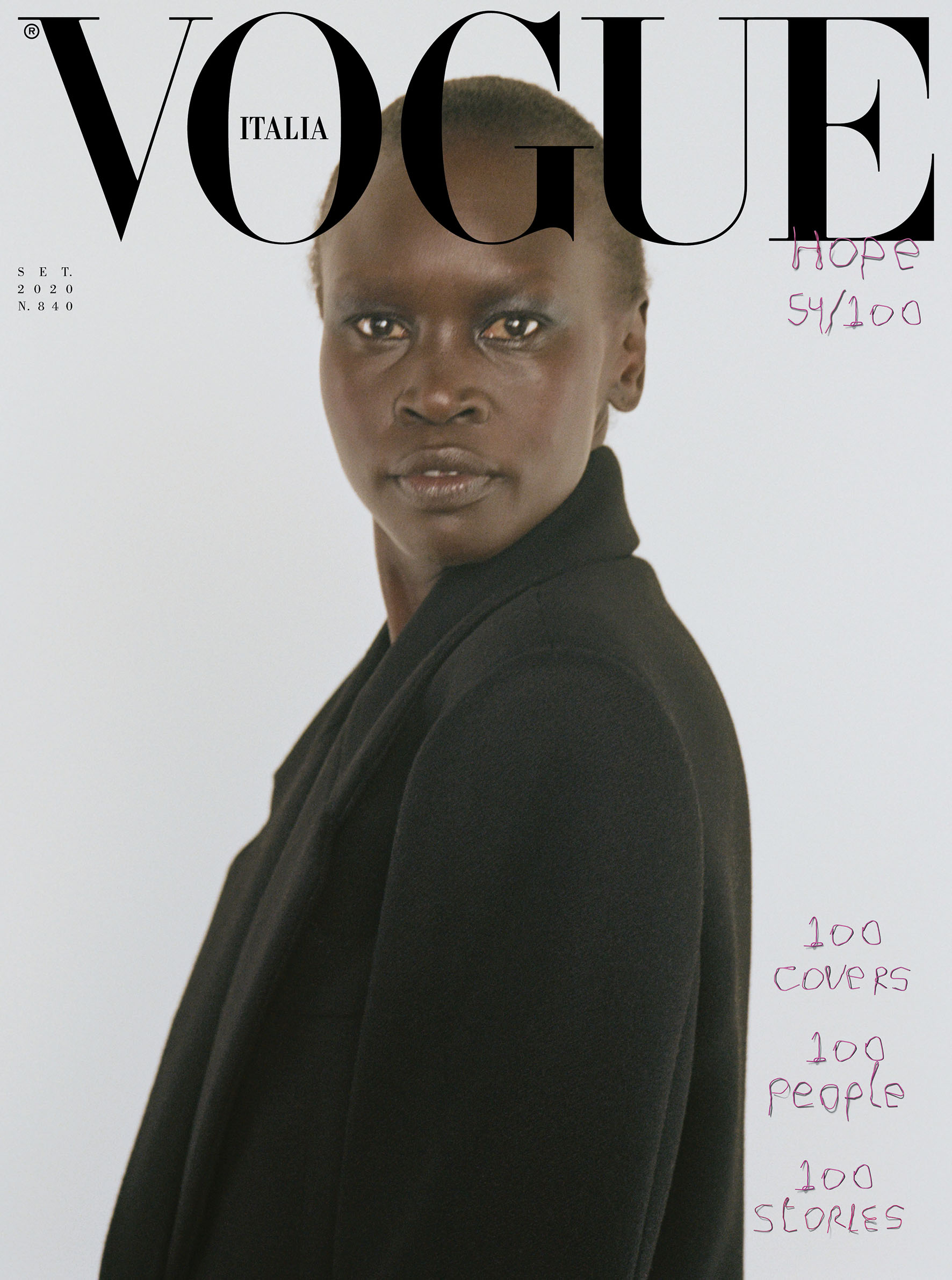 That’s amazing to hear. I know fashion month is coming and September issues normally open the floodgates to what we consider for the next four or five weeks ahead. There’s been this duality between what’s going on here in America compared to what’s going on in Italy and France, albeit things will undoubtedly be more local in Milan and Paris. As far as your perspective beyond what Milan fashion week will be, how will fashion continue in the next six months? What do you see for the system?
It’s so difficult to make predictions. If I think about the vibe I feel from the city, and that must have changed at least four times in the last four weeks. There was a moment when everybody was thinking that coming back after summer break it would be the moment of things opening again. Well now, they’re already thinking there’s a lot of new cases, and a lot of people are worried about the situation to come to the end of September. My personal perspective is that I really think that last June and July, the industry understood how important live shows were, as much as we all love digital moments. We’re really seeing that people understood that we need to meet in person and we need to do something physical and work as much as we can to amplify those physical moments with digital measures. As for this fashion week, what I hear in Milan is that a lot of brands will host something physical. I know that more than 20 shows will have some form of an audience. We’re learning to adjust our strategy and I don’t think there’s a lot of point in trying to predict what it’s going to be like in six months’ time.

From this side, you know, Italians are very well known for being extremely last minute. But that way of life has made us very agile and we are a little more prepared than other countries to live this last-minute life. Back at the beginning of quarantine, we were the first book to run a cover that addressed COVID19, when for other editions it took two, three, or four months. Joan Smalls Calls for Change, the House of Cardin, and more of the news you missed
NEXT NYFW is Almost Here, 50 models for Change, Jacquemus’ New Book, and more of the news you missed